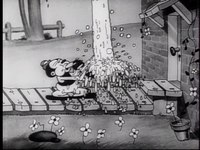 Sinkin' in the Bathtub is the first Warner Bros. theatrical cartoon short as well as the first of the Looney Tunes series. The cartoon features Bosko, and the title is a pun on the 1929 song Singin' in the Bathtub. The name of the Looney Tunes series bears an obvious debt to the Walt Disney Animation Studios' Silly Symphony series, which began in 1929. Steve Schneider writes that this "immediately reveals Harman and Ising's belief that the only way to compete — or even to survive — in the cartoon trade was to cleave to the Disney version."

left|thumb|225px|Bosko plays the shower spray as a harp