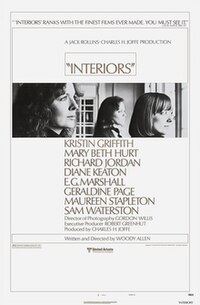 The film centers on the three children of Arthur (E. G. Marshall), a corporate attorney, and Eve (Geraldine Page), an interior decorator. Renata (Diane Keaton) is a poet whose husband Frederick, a struggling writer, feels eclipsed by her success. Flyn (Kristin Griffith) is an actress who is away most of the time filming; the low quality of her films is an object of ridicule behind her back. Joey (Mary Beth Hurt), who is in a relationship with Mike (Sam Waterston), cannot settle on a career, and resents her mother for favoring Renata, while Renata resents their father's concern over Joey's lack of direction.