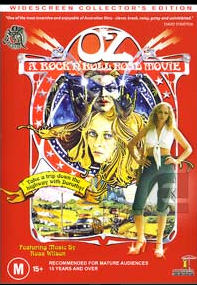 Oz (a.k.a. Oz – A Rock 'n' Roll Road Movie also released as 20th Century Oz in United States) is a 1976 Australian film written, directed and co-produced by Chris Löfvén. It stars Joy Dunstan, Graham Matters, Bruce Spence, Gary Waddell, and Robin Ramsay; and received four nominations at the 1977 AFI Awards. The musical score is by Ross Wilson (frontman for Daddy Cool and Mondo Rock). The plot is a re-imagining of the 1939 The Wizard of Oz film transferred to 1970s Australia and aimed at an older teen / young adult audience. It was released on DVD in 2004 as Oz - A Rock 'n' Roll Road Movie : Collector's Edition with additional material. The poster and album sleeve for the American release was done by rock artist Jim Evans.

Dorothy (Joy Dunstan) is a sixteen-year-old groupie riding with a rock band, Wally (Graham Matters) and the Falcons. Suddenly, the van is in a road accident, and she hits her head. She wakes up in a fantasy world as gritty and realistic as the one she came from and learns she killed a young thug in the process. A gay clothier, Glin the Good Fairy (Robin Ramsay), gives her a pair of red shoes as a reward to help her see the last concert of the Wizard (Matters), an androgynous glam rock singer. She is pursued by the thug's brother (Ned Kelly) who attempts to rape her on several occasions. She also meets a dumb surfer Blondie (Bruce Spence), a heartless mechanic Greaseball (Michael Carman), and a cowardly biker Killer (Garry Waddell).