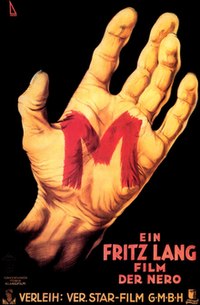 M (, lit. M – A City Searches for a Murderer) is a 1931 German thriller film directed by Fritz Lang and starring Peter Lorre in his breakthrough role as Hans Beckert, a serial killer of children. An early example of a procedural drama, the film centers on the manhunt for Lorre’s character, conducted by both the police and the criminal underworld.

In Berlin, a group of children are playing an elimination game in the courtyard of an apartment building, using a chant about a murderer of children. A woman sets the table for lunch, waiting for her daughter to come home from school. A wanted poster warns of a serial killer preying on children, as anxious parents wait outside a school.