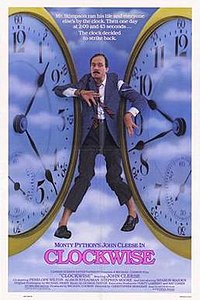 Clockwise is a 1986 British comedy film starring John Cleese, directed by Christopher Morahan, written by Michael Frayn and produced by Michael Codron. The film's music was composed by George Fenton.

Brian Stimpson (Cleese), headmaster of Thomas Tompion Comprehensive School, has been elected to chair the annual Headmasters' Conference meeting at the fictional University of Norwich. Extremely disorganised as a young man, Stimpson is now obsessively organised and punctual, and his school runs "like clockwork". He is the first headmaster of a comprehensive school to chair the Headmasters' Conference, that honour usually being reserved for heads of the more elite public schools.