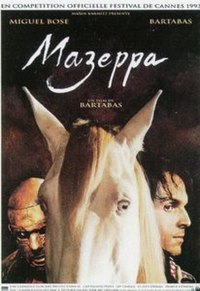 Mazeppa is a 1993 French drama film directed by Bartabas. It was entered into the 1993 Cannes Film Festival where it won the Technical Grand Prize. It is part of the cultural legacy of Mazeppa, a Ukrainian hero and a narrative poem by Lord Byron.

Based loosely on French painter Théodore Géricault's life who met the famous equestrian Antonio Franconi, the director of the Cirque Olympique. Gericault decided to stay and live with the circus and painted only horses to try and understand the mystery of this animal. Mazeppa embodies a man carried away by his passion.