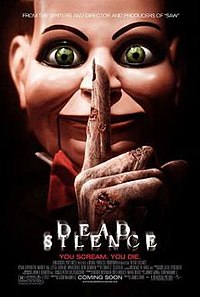 Jamie Ashen and his wife, Lisa, receive an anonymous gift of a ventriloquist doll called "Billy". As Lisa is playing with Billy while Jamie goes to pick their carry-out dinner order, a figure approaches her, causing her to scream. Later, Jamie returns home and finds Lisa dead with her tongue cut out. After Jamie is released from custody by Detective Jim Lipton due to lack of evidence, he spots inside Billy's box a mysterious message about "Mary Shaw", a deceased ventriloquist from his hometown, Raven's Fair.