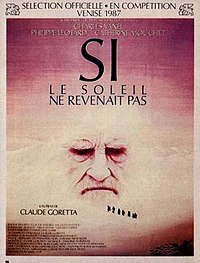 If the Sun Never Returns is a Franco-Swiss film directed by Claude Goretta, with a script written by the director, from the original novel by Charles Ferdinand Ramuz and stars Charles Vanel, Catherine Mouchet and Philippe Léotard. It was one of the In-Competition Films at the 1987 Venice Film Festival. The film was selected as the Swiss entry for the Best Foreign Language Film at the 60th Academy Awards, but was not accepted as a nominee.

In a little village, lost at the bottom of a valley in the midst of mountains and deprived of sun for long months, an old man Anzerul (Charles Vanel), prophet and magician, announces the end of the world. According to his calculations the sun will not return to the village and the village will descend into an endless winter. The villagers give way, one after the other, to panic, piling up wood or giving themselves up to drink. Only Isabelle Antide (Catherine Mouchet), holds up against the hysteria. She urges them not to give in to terror, and to struggle against a damaging fatalism. On the 13 April, the day the sun returns to the village each year, she leads them above the cover of fog which hangs over their valley.