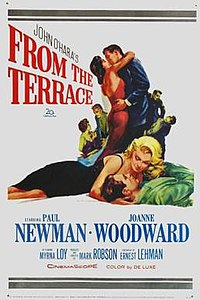 From the Terrace is a 1960 American DeLuxe Color romantic drama film in CinemaScope directed by Mark Robson from a screenplay by Ernest Lehman, based on the 1958 novel of the same name by John O'Hara. The film stars Paul Newman, Joanne Woodward, Myrna Loy, Ina Balin, George Grizzard, and Leon Ames, with a young Barbara Eden appearing in one scene. The plot tells the story of the estranged son of a Pennsylvania factory owner who marries into a prestigious family and moves to New York to seek his fortune.

In 1946, navy veteran David Alfred Eaton (Paul Newman) returns home from the war to Philadelphia. He finds his mother Martha (Myrna Loy) driven to alcoholism by years of neglect and abuse from her husband Samuel Eaton (Leon Ames), owner of a prestigious iron and steel company. Having withdrawn from his family after the death of his firstborn son thirteen years earlier, Samuel's resentment drove Alfred to turn his back on the family business and strike out on his own with Lex Porter (George Grizzard), his closest friend.