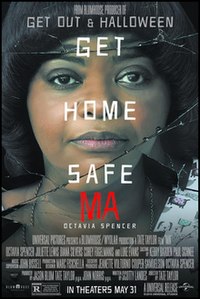 Ma is a 2019 American psychological horror film produced, co-written and directed by Tate Taylor. It stars Octavia Spencer, Juliette Lewis, Diana Silvers, Corey Fogelmanis, and Luke Evans, and follows a group of teenagers who befriend a lonely middle-aged woman. She lets them party in her basement, and they end up being terrorized by her. The film was produced by Jason Blum through his Blumhouse Productions company, along with Tate Taylor and John Norris.

Teenager Maggie Thompson moves with her mother Erica to her Ohio hometown after Erica's husband leaves her. At her new high school, Maggie befriends Haley, Darrell, Chaz, and Andy, who immediately develops a crush on her. They convince Sue Ann "Ma" Ellington, a veterinary technician, to help buy them alcohol because they are underage. Sue Ann anonymously reports the teenagers' activities, but they are released because of the officer's history with Andy's father, Ben. The next day, Sue Ann invites the teenagers to drink in her basement. The next time they go, Sue Ann has decorated her basement and many other teenagers show up at her house to party, making her popular among the students.