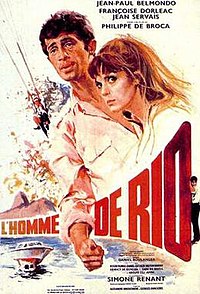 That Man from Rio is a 1964 adventure film directed by Philippe de Broca and starring Jean-Paul Belmondo and Françoise Dorléac. It was the first film to be made by the French subsidiary of United Artists, Les Productions Artistes Associés. The film was a huge success with a total of 4,800,626 admissions in France, becoming the 5th highest earning film of the year.

As airman Adrien Dufourquet embarks on an 8-day leave in Paris to see his fiancée Agnès, two South American Indians steal an Amazon statuette from a museum and force Professor Catalan, the curator, into their car. Catalan was the companion of Agnès' father on an Amazon expedition during which her father died. Catalan believes that the statuette is one of three which hold the secret to an Amazon treasure. Adrien arrives in time to see the Indians abducting Agnès, the only one who knows the location of her father's statuette, and he pursues them to the airport where he steals a ticket and boards the same plane.