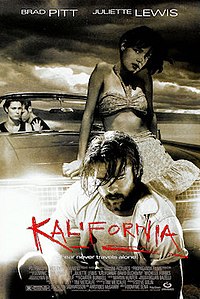 Kalifornia is a 1993 American road thriller film directed by Dominic Sena, in his directorial debut. It stars Brad Pitt, Juliette Lewis, David Duchovny, and Michelle Forbes. The film tells the story of a journalist (Duchovny) and his photographer girlfriend (Forbes) traveling cross-country to research serial killings, who unwittingly carpool with a psychopath (Pitt) and his childlike girlfriend (Lewis).

Brian Kessler is a graduate student and journalist whose article about serial killers has gotten him an offer for a book deal from a publisher. He and his girlfriend Carrie Laughlin, an avant garde photographer, decide to relocate to California in hopes of enriching their careers. The two plot their journey from Louisville, Kentucky to Los Angeles, planning to visit infamous murder sites along the way which Carrie can photograph for Brian's book. Short on funds, Brian posts a ride-share ad on the university campus.