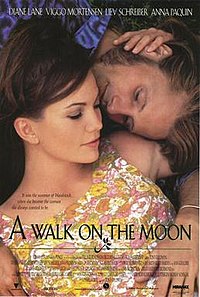 A Walk on the Moon is a 1999 drama film starring Diane Lane, Viggo Mortensen, Liev Schreiber and Anna Paquin. The film, which was set against the backdrop of the Woodstock festival of 1969 and the Moon landing of that year, was distributed by Miramax Films. Directed by Tony Goldwyn (in his directorial debut), it was highly acclaimed on release, particularly Diane Lane's performance for which she earned an Independent Spirit Award nomination for Best Female Lead.

Pearl Kantrowitz (Diane Lane) and her husband Marty (Liev Schreiber) are a lower middle class Jewish couple in New York City, where Marty is a television repairman. The movie begins with the couple and their family, including their teenage daughter Alison (Anna Paquin), their young son Danny (Bobby Boriello), and Marty's mother Lillian (Tovah Feldshuh), going to their Catskills summer camp retreat, Dr. Fogler's Bungalows, which they attend each summer.