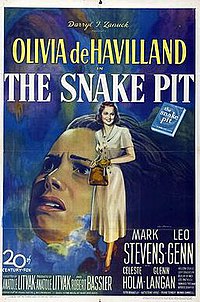 The Snake Pit is a 1948 American drama film directed by Anatole Litvak and starring Olivia de Havilland, Mark Stevens, Leo Genn, Celeste Holm, Beulah Bondi, and Lee Patrick. Based on Mary Jane Ward's 1946 semi-autobiographical novel of the same name, the film recounts the tale of a woman who finds herself in an insane asylum and cannot remember how she got there.

Virginia Cunningham is an apparently schizophrenic inmate at a mental institution called the Juniper Hill State Hospital (which treats only female patients). She hears voices and seems so out of touch with reality that she doesn’t recognize her husband Robert.