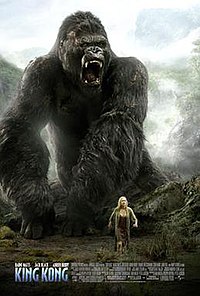 King Kong is a 2005 epic monster adventure film co-written, produced, and directed by Peter Jackson. A second remake of the 1933 film of the same title, the film stars Naomi Watts, Jack Black, Adrien Brody, and Andy Serkis as the title character, through motion capture. Set in 1933, it follows the story of an ambitious filmmaker who coerces his cast and hired ship crew to travel to the mysterious Skull Island. There, they encounter prehistoric creatures living on the island as well as a legendary giant gorilla known as Kong, whom they capture and take to New York City.

In 1933, during the Great Depression, New York City actress Ann Darrow is hired by financially troubled filmmaker Carl Denham to star in a film alongside actor Bruce Baxter. Ann learns her favorite playwright, Jack Driscoll, is the screenwriter. Filming takes place on the SS Venture, under Captain Englehorn, and under Carl's pretense it will be sailing to Singapore. In truth, Carl intends to sail to and film the mysterious Skull Island. Captain Englehorn has second thoughts about the voyage, prompted by his crew's speculation of trouble ahead. On the voyage, Ann and Jack fall in love. The Venture receives a radio message informing Englehorn there is a warrant for Carl's arrest due to his defiance of the studio's orders to cease production.