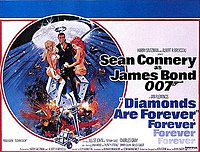 Diamonds Are Forever is a 1971 spy film, the seventh in the James Bond series produced by Eon Productions. It is the sixth and final Eon film to star Sean Connery, who returned to the role as the fictional MI6 agent James Bond, having declined to reprise the role in On Her Majesty's Secret Service (1969).

James Bondagent 007pursues Ernst Stavro Blofeld and eventually finds him at a facility where Blofeld look-alikes are being created through surgery. Bond kills a test subject, and later the "real" Blofeld, by drowning him in a pool of superheated mud.