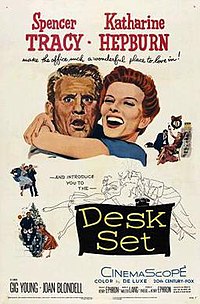 Desk Set (released as His Other Woman in the UK) is a 1957 American romantic comedy film directed by Walter Lang and starring Spencer Tracy and Katharine Hepburn. The screenplay was written by Phoebe Ephron and Henry Ephron from the 1955 eponymous play by William Marchant.

At the Federal Broadcasting Network in Midtown Manhattan, Bunny Watson (Katharine Hepburn) is in charge of its reference library, which is responsible for researching facts and answering questions on all manner of topics, great and small. Watson has been involved for seven years with rising network executive Mike Cutler (Gig Young), with no marriage in sight.