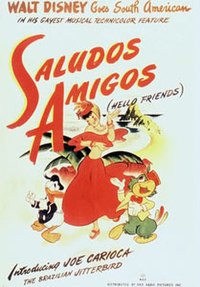 Saludos Amigos (Spanish for "Greetings, Friends") is a 1942 American live-action animated package featurette produced by Walt Disney and released by RKO Radio Pictures. It is the sixth Disney animated feature film and the first of the six package films produced by Walt Disney Productions in the 1940s. Set in Latin America, it is made up of four different segments; Donald Duck stars in two of them and Goofy stars in one. It also features the first appearance of José Carioca, the Brazilian cigar-smoking parrot. Saludos Amigos premiered in Rio de Janeiro on August 24, 1942. It was released in the United States on February 6, 1943. Saludos Amigos was popular enough that Walt Disney decided to make another film about Latin America, The Three Caballeros, to be produced two years later. At 42 minutes, it is Disney's shortest animated feature to date.