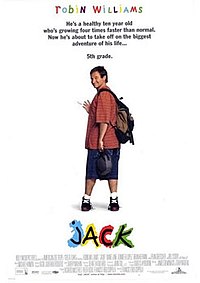 The film begins as Karen Powell goes into labor during a Halloween party and is rushed to the hospital by her husband, Brian, and their friends. Although the delivery is successful, the baby is extremely premature, born after only ten weeks of pregnancy. Strangely, the infant seems to be a normal, healthy, full-term baby. After examinations and tests, the infant, now named Jack, is found to have an exaggerated form of Werner syndrome. Dr. Benfante and Dr. Lin diagnose a very rare autosomal recessive disorder. Their prognosis is that Jack will develop and age at a rate four times as fast as an average child, rendering him "sick as frick" as Dr. Lin explains colloquially.