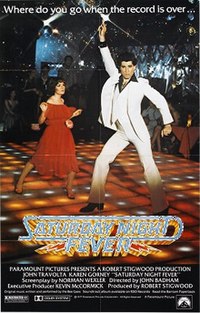 Saturday Night Fever is a 1977 American dance drama film directed by John Badham. It stars John Travolta as Tony Manero, a working-class young man who spends his weekends dancing and drinking at a local Brooklyn discothèque; Karen Lynn Gorney as Stephanie Mangano, his dance partner and eventual confidante; and Donna Pescow as Annette, Tony's former dance partner and would-be girlfriend. While in the disco, Tony is the champion dancer. His circle of friends and weekend dancing help him to cope with the harsh realities of his life: a dead-end job, clashes with his unsupportive and squabbling parents, racial tensions in the local community, and his general restlessness.

Tony Manero is a 19-year-old Italian American from the Bay Ridge neighborhood of Brooklyn, New York. He lives with his parents, grandmother, and younger sister, and works at a dead-end job in a small hardware store. To escape his day-to-day life, Tony goes to 2001 Odyssey, a local disco club, where he is king of the dance floor and receives the admiration and respect he longs for. Tony has four close Italian American friends: Joey, Double J, Gus, and Bobby C. A fringe member of his group of friends is Annette, a neighborhood girl who is infatuated with Tony; however, he is not attracted to her.