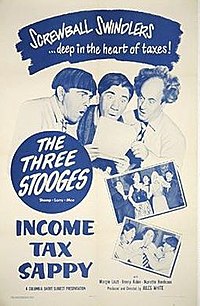 Income Tax Sappy is a 1954 short subject directed by Jules White starring American slapstick comedy team The Three Stooges (Moe Howard, Larry Fine and Shemp Howard). It is the 153rd entry in the series released by Columbia Pictures starring the comedians, who released 190 shorts for the studio between 1934 and 1959.

The boys are set to do their income taxes, which are due the next day. As they do, Moe mentions on how easy it is for people to cheat on their tax returns and not get caught, so the three of them get the idea to create their own fake deductions to ensure a hefty refund, and throughout their endeavors, Larry and Shemp come up with an idea to come up with creative deductions for other peoples' tax returns and charging them for it. Moe finds this idea grand, and the three of them become "tax experts."