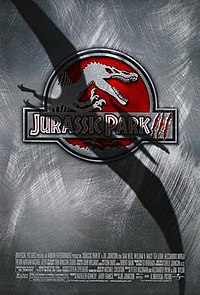 Jurassic Park III is a 2001 American science fiction action film, written by Peter Buchman, Alexander Payne, and Jim Taylor and directed by Joe Johnston. It is the third installment in the Jurassic Park franchise and the final film in the original Jurassic Park trilogy, following The Lost World: Jurassic Park (1997). The film stars Sam Neill, William H. Macy, Téa Leoni, Alessandro Nivola, Trevor Morgan, and Michael Jeter. It is the first film in the franchise to not be directed by Steven Spielberg, who served as executive producer, instead. It is also the franchise's first film to not be based on a novel by Michael Crichton, although the film includes characters and ideas by him, including scenes from his first novel Jurassic Park (1990). The film revolves around a divorced couple who trick paleontologist Dr. Alan Grant into helping them find their son, who is missing on Isla Sorna.

Twelve-year-old Eric Kirby and his mother's boyfriend, Ben Hildebrand, go parasailing near the restricted Isla Sorna. The boat's crew is killed by an unknown attacker, prompting Ben to detach the line before the vessel crashes into rocks. Eric and Ben drift towards the island.