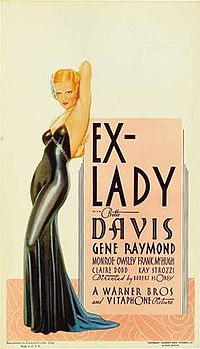 Ex-Lady is a 1933 American pre-Code comedy/drama film directed by Robert Florey. The screenplay by David Boehm is a remake of the Barbara Stanwyck film Illicit (1931), both crediting a story (actually a play) by Edith Fitzgerald and Robert Riskin. The film focuses on a pair of lovers, commercial illustrator Helen Bauer (Bette Davis) and advertising writer Don Peterson (Gene Raymond), who have been living together quite happily (in separate apartments) for some time. One night, after hiding in Helen’s bedroom until their party guests have all left, Don announces that he is tired of sneaking around. He wants marriage—and possibly children—and Helen finally agrees, although she is afraid that it will wreck their relationship. Her predictions of trouble—increased by the stresses of opening their own advertising agency—come true, but in the end, with the serendipitous intervention of their perpetually inebriated friend, Van (Frank McHugh), they reconcile and resume the mixed blessings of wedded bliss.

Helen Bauer (Bette Davis) is a glamorous, successful, headstrong, and very liberated New York graphic artist with modern ideas about romance. She is involved with Don Peterson (Gene Raymond) but is not prepared to sacrifice her independence by entering into matrimony. The two agree to wed only to pacify Helen's conventional immigrant father Adolphe (Alphonse Ethier), whose Old World views spur him to condemn their affair. They form a business partnership, but financial problems at their advertising agency put a strain on the marriage and Don begins seeing Peggy Smith (Kay Strozzi), one of his married clients. Convinced it was marriage that disrupted their relationship, Helen suggests they live apart but remain lovers. When Don discovers Helen is dating his business rival, playboy Nick Malvyn (Monroe Owsley), he returns to Peggy, but in reality his heart belongs to his wife. Agreeing their love will help their marriage survive its problems, the two reconcile and settle into domestic bliss.