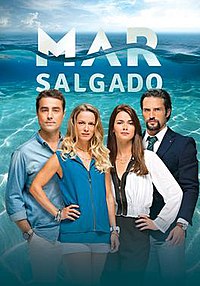 Mar Salgado (Salty Sea) is a Portuguese telenovela which began airing on SIC from September 15, 2014 until September 18, 2015. The series starred Margarida Vila-Nova, Joana Santos, Ricardo Pereira and José Fidalgo, and was written by Inês Gomes.

Leonor Trigo was only 16 years-old when she fell in love with Gonçalo, a 24-year-old famous motorcycle racer who ends up getting her pregnant with twins. Realizing that Gonçalo will never accept the children, she hides her pregnancy from everyone. When Leonor at the end of her pregnancy, her father, Alberto Trigo, discovers the truth and demands that Gonçalo take responsibility. Gonçalo panics for fear of a lawsuit, with the certainty that a scandal of a relationship with a minor would drive sponsors away and cause him serious problems in the family.