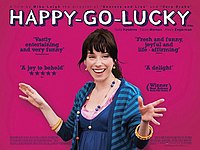 Happy-Go-Lucky is a 2008 British comedy-drama film written and directed by Mike Leigh. The screenplay focuses on a cheerful and optimistic primary school teacher and her relationships with those around her. The film was well received by critics and resulted in a number of awards for Mike Leigh's direction and screenplay, lead actress Sally Hawkins's performance, and Eddie Marsan's performance in a supporting role.

Thirty years old and single, Pauline "Poppy" Cross shares a London flat with her best friend Zoe, a fellow teacher. Poppy is free-minded, high-spirited and kind-hearted. The film opens with Poppy trying to engage a shop employee in conversation. He ignores her, yet his icy demeanour does not bother her. She maintains her good mood even when she discovers her bicycle has been stolen. Her main concern is not getting a new one or finding the bicycle, but that she did not get a chance to say goodbye to it. This prompts her to decide to learn how to drive.