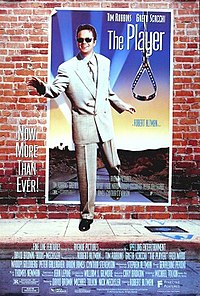 The Player is a 1992 American satirical black comedy film directed by Robert Altman and written by Michael Tolkin, based on his own 1988 novel of the same name. The film stars Tim Robbins, Greta Scacchi, Fred Ward, Whoopi Goldberg, Peter Gallagher, Brion James and Cynthia Stevenson, and is the story of a Hollywood film studio executive who kills an aspiring screenwriter he believes is sending him death threats.

Griffin Mill is a Hollywood studio executive dating story editor Bonnie Sherow. He hears story pitches from screenwriters and decides which have the potential to be made into films, green-lighting only 12 out of 50,000 submissions every year. His job is threatened when up-and-coming story executive Larry Levy begins working at the studio. Mill has also been receiving death threat postcards, assumed to be from a screenwriter whose pitch he rejected.