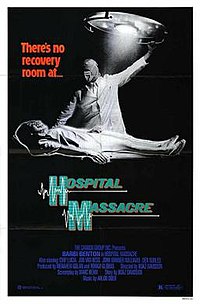 Hospital Massacre is a 1982 American slasher film directed by Boaz Davidson and starring Barbi Benton. Its plot follows a woman who becomes trapped on an empty floor of a hospital, where a murderer posing as a surgeon attempts to kill her.

In 1961, an unpopular boy named Harold leaves a Valentine's Day card at the home of the beauty Susan Jeremy. Susan and her friend David mock and crumple up the card, prompting an enraged Harold to break into the house and kill David by hanging him from a hatstand.