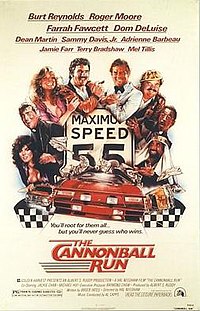 The Cannonball Run is a 1981 action comedy film. It was directed by Hal Needham, produced by Hong Kong's Golden Harvest films, and distributed by 20th Century Fox. Filmed in Panavision, it features an all-star ensemble cast, including Burt Reynolds, Dom DeLuise, Roger Moore, Farrah Fawcett, Jackie Chan and Dean Martin. The film is based on the 1979 running of an actual cross-country outlaw road race in the United States, beginning in Connecticut and ending in California.

Race teams have gathered in Connecticut to start a cross-country car race. One at a time, teams drive up to the starters' stand, punch a time card to indicate their time of departure, then take off.