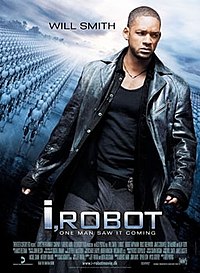 I, Robot (stylized as i,smallcaps) is a 2004 American science fiction action film directed by Alex Proyas. The screenplay by Jeff Vintar and Akiva Goldsman is from a screen story by Vintar, based on his original screenplay "Hardwired", and suggested by Isaac Asimov's 1950 short-story collection of the same name. The film stars Will Smith, Bridget Moynahan, Bruce Greenwood, James Cromwell, Chi McBride, and Alan Tudyk. In 2035, highly intelligent robots fill public service positions throughout the dystopian world, operating under three rules to keep humans safe. Detective Del Spooner (Smith) investigates the alleged suicide of U.S. Robotics founder Alfred Lanning (Cromwell) and believes that a human-like robot (Tudyk) murdered him.

In the year 2035, humanoid robots serve humanity, which is protected by the Three Laws of Robotics of Isaac Asimov. Del Spooner, a homicide detective in the Chicago Police Department, has come to hate and distrust robots, after a robot rescued him from a car crash while allowing a 12-year-old girl to drown, based purely on cold logic and odds of survival. When Dr. Alfred Lanning, co-founder of U.S. Robotics (USR), falls to his death from his office window, a message he left behind requests Spooner be assigned to the case. The police declare the death a suicide, but Spooner is skeptical, and Lawrence Robertson, the CEO and other co-founder of USR, reluctantly allows him to investigate.