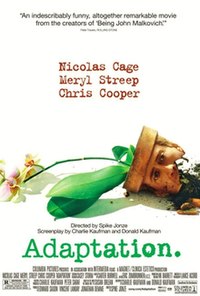 The self-loathing Charlie Kaufman is hired to write the screenplay adaptation of Susan Orlean's The Orchid Thief. He is struggling with anxiety, social phobia, depression, and low self-esteem. His twin brother, Donald, has moved into his house and is freeloading there. Donald decides to become a screenwriter like Charlie and attends one of Robert McKee's famous seminars.