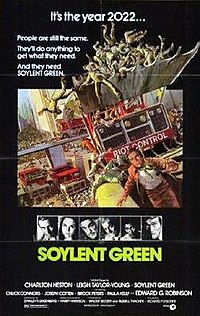 Soylent Green is a 1973 American ecological dystopian thriller film directed by Richard Fleischer and starring Charlton Heston and Leigh Taylor-Young. Edward G. Robinson appears in his final film. Loosely based on the 1966 science fiction novel Make Room! Make Room! by Harry Harrison, it combines both police procedural and science fiction genres: the investigation into the murder of a wealthy businessman; and a dystopian future of dying oceans and year-round humidity due to the greenhouse effect, resulting in suffering from pollution, poverty, overpopulation, euthanasia and depleted resources.

In the year 2022, the cumulative effects of overpopulation, pollution and some apparent climate catastrophe have caused severe worldwide shortages of food, water and housing. There are 40 million people in New York City alone, where only the city's elite can afford spacious apartments, clean water and natural food, and even then at horrendously high prices. The homes of the elite usually include concubines who are referred to as "furniture" and serve the tenants as slaves.