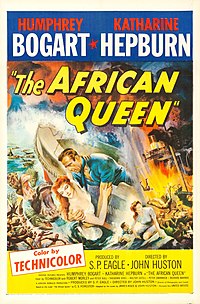 The African Queen is a 1951 British-American adventure film adapted from the 1935 novel of the same name by C. S. Forester. The film was directed by John Huston and produced by Sam Spiegel and John Woolf. The screenplay was adapted by James Agee, John Huston, John Collier and Peter Viertel. It was photographed in Technicolor by Jack Cardiff and has a music score by Allan Gray. The film stars Humphrey Bogart (who won the Academy Award for Best Actor, his only Oscar) and Katharine Hepburn with Robert Morley, Peter Bull, Walter Gotell, Richard Marner and Theodore Bikel.

Samuel Sayer and his sister Rose are British missionaries in German East Africa in August 1914. Their post and supplies are delivered by a small steamboat named the African Queen, helmed by the rough-and-ready Canadian mechanic Charlie Allnut, whose coarse behavior they stiffly tolerate.