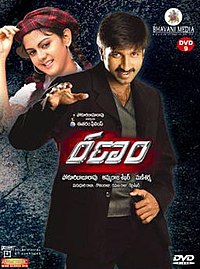 Ranam ( War) is a 2006 Indian Telugu-language action comedy film produced by Pokuri Babu Rao by on Eetharam Films banner and directed by Amma Rajasekhar. It stars Gopichand and Kamna Jethmalani in the lead roles and features music composed by Mani Sharma. The film recorded as Super Hit at the box office. The film is the first debut to Choreographer Amma Rajasekhar as director. The film was remade into Oriya as Mahanayak and in Kannada as Bhadra. The film recorded as a box office success and ran for 100 days and praised for its comedy timing and acting performances.

Chinna (Gopichand) is a rural character of a young man, naughty and indifferent. His father (Chandra Mohan) is always concerned about his future. He has two brothers who show no such mischief in their behavior. Chinna moves to the city for college and in the very first act, he starts fooling around and teasing the girls in the college in the name of ragging. A girl named Maheswari (Kamna Jethmalani) starts admiring him. He has a gang of friends, and there is a mandatory Principal (Dharmavarapu Subramanyam) who always keeps himself at the receiving end of student mischief.