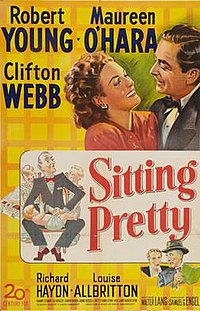 Sitting Pretty is a 1948 American comedy film which tells the story of a family who hires Lynn Belvedere, a man with a mysterious past, to babysit their children. It stars Robert Young, Maureen O'Hara, and Clifton Webb. The film was adapted by F. Hugh Herbert from the comic novel Belvedere (1947) by Gwen Davenport. It was directed by Walter Lang.

Lawyer Harry King and his wife Tacey have trouble retaining a nanny for their three young, rambunctious boys. When the latest in a string of servants (all women) quits, Tacey advertises for a replacement and hires Lynn Belvedere sight unseen, only to later discover that Lynn is a dapper gentleman, one with many skills and achievements. Despite their misgivings (and Belvedere's declaration that he detests children), the Kings reluctantly agree to a trial period. Belvedere quickly wins over the boys, but his superior attitude annoys Harry.