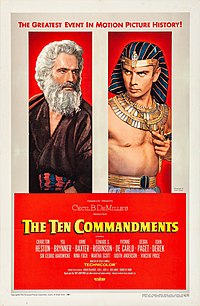 The Ten Commandments is a 1956 American epic religious drama film produced, directed, and narrated by Cecil B. DeMille, shot in VistaVision (color by Technicolor), and released by Paramount Pictures. Based on the 1949 novel Prince of Egypt by Dorothy Clarke Wilson, the 1859 novel Pillar of Fire by J. H. Ingraham, the 1937 novel On Eagle's Wings by A. E. Southon, and the Book of Exodus, The Ten Commandments dramatizes the biblical story of the life of Moses, an adopted Egyptian prince who becomes the deliverer of his real brethren, the enslaved Hebrews, and thereafter leads the Exodus to Mount Sinai, where he receives, from God, the Ten Commandments. The film stars Charlton Heston in the lead role, Yul Brynner as Rameses, Anne Baxter as Nefretiri, Edward G. Robinson as Dathan, Yvonne De Carlo as Sephora, Debra Paget as Lilia, and John Derek as Joshua; and features Sir Cedric Hardwicke as Seti I, Nina Foch as Bithiah, Martha Scott as Yochabel, Judith Anderson as Memnet, and Vincent Price as Baka, among others.

The film is presented in two parts, divided by an intermission.