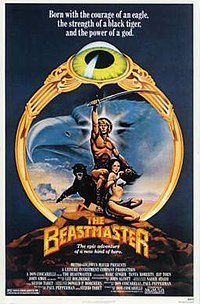 The Beastmaster is a 1982 sword and sorcery film directed by Don Coscarelli and starring Marc Singer, Tanya Roberts, John Amos and Rip Torn. Loosely based on the 1959 novel The Beast Master by Andre Norton, the film is about a man who can communicate with animals, and who fights an evil wizard and his army.

In the kingdom of Aruk, witches tell high priest Maax [ ] a prophecy that he will die at the hands of King Zed's unborn son. Maax sends one of his witches to kidnap and kill the child, but before she can, a villager rescues the child and raises him as his own son in the village of Emur. Named Dar, the child learns how to fight and develops his ability to telepathically communicate with animals. Years later, a fully grown Dar witnesses his people being slaughtered by the Juns, a horde of fanatic barbarians allied with Maax. Dar, the only survivor of the attack, journeys to Aruk to avenge his people. In time, Dar is joined by a golden eagle he names Sharak, a pair of thieving ferrets he names Kodo and Podo, and a black tiger he names Ruh.