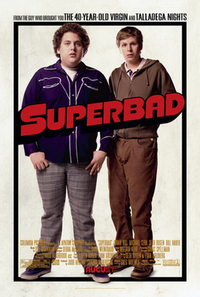 Superbad is a 2007 American coming-of-age teen comedy film directed by Greg Mottola and produced by Judd Apatow. The film stars Jonah Hill and Michael Cera as Seth and Evan, two teenagers about to graduate high school. Before graduating, the boys want to party and lose their virginity, but their plan proves harder than expected. Written by Seth Rogen and Evan Goldberg, the script began development when they were 13 years old, and was loosely based on their experience in Grade 12 in Vancouver during the 1990s; the main characters have the same given names as the two writers. Rogen was also initially intended to play Seth, but due to age and physical size this was changed, and Hill went on to portray Seth, while Rogen portrayed the irresponsible Officer Michaels, opposite former Saturday Night Live star Bill Hader as Officer Slater.

Seth and Evan are two high school seniors who have been best friends since childhood. The two are about to go off to different colleges. After Seth is paired with Jules during home economics class, she invites him to a party at her house that night. Their friend Fogell reveals his plans to obtain a fake ID, so Seth promises to buy alcohol for Jules' party with money she gives him. Evan runs into his love interest Becca and he offers to get her some vodka for the party. Despite Fogell's fake ID having only one name, "McLovin," Fogell successfully buys the liquor, but is knocked out at the last second by a robber. When police officers Slater and Michaels arrive, Seth and Evan believe that Fogell is being arrested. In reality, the officers agree to give Fogell a ride to the party.