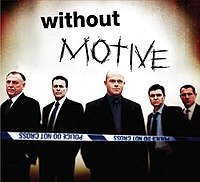 Without Motive is a British crime drama series broadcast on ITV, starring Ross Kemp as the main protagonist, Detective Constable Jack Mowbray, a born and bred Bristol detective whose world is turned upside down when he is assigned to a major murder enquiry involving a serial killer, who is randomly attacking young women, apparently without motive. Two series of the programme were produced. The first was produced by HTV, and the second by Meridian Broadcasting. Both series aired consecutively between 2 October 2000 and 1 November 2001. Both series were issued on DVD on 11 October 2011, exclusively in the United States by Acorn Media.

Detective Constable Jack Mowbray (Ross Kemp) investigates when the brutal murder of a young woman in Bristol sets off a chain of events, which unbeknown to him, threaten to tear his family apart and change the course of his live forever. When the Bristol murder is linked to a series of recent killings, known as the 'M4 Murders', the investigating team grows to more than a dozen detectives, and just as many petty jealousies and full-blown rivalries. Mowbray’s boss, Detective Chief Superintendent Derek Henderson (Kenneth Cranham), keeps the pressure on as it becomes clear that the latest killing will not be the last. With little clue or pattern to suggest the identity of the killer, the team are forced to a race against time to find the predator before he strikes again — without apparent motive.