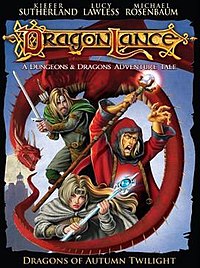 Dragonlance: Dragons of Autumn Twilight is a 2008 American animated film, the first to be based on the Dragonlance campaign setting of the Dungeons & Dragons role-playing game. It is based on the first novel written for the campaign setting, Dragons of Autumn Twilight (1984), co-written by Margaret Weis and Tracy Hickman, both of whom gave assistance for the film's screenplay adaptation by George Strayton. The film was directed by Will Meugniot and distributed by Paramount Pictures, directly to video.

The film begins with the return of a group of friends consisting of Tanis Half-Elven, Sturm Brightblade, Caramon Majere, Raistlin Majere, Flint Fireforge, and Tasslehoff Burrfoot. Kitiara Uth Matar, the half-sister of the twins Caramon and Raistlin, was supposed to be there as well, but for reasons unexplained at the time could only send a mysterious note. The Companions had separated five years previously to pursue their own quests.