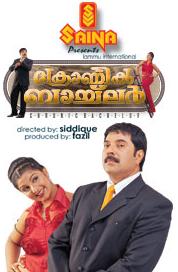 Chronic Bachelor is a 2003 Indian Malayalam-language romantic comedy drama film, written and directed by Siddique. It is about the life of Sathyaprathapan, a bachelor. It features Mammootty, Mukesh, Rambha, Bhavana, Indraja, Innocent and others. Jyothika was signed as the lead actress but later was replaced by Rambha. The movie was produced by Fazil.