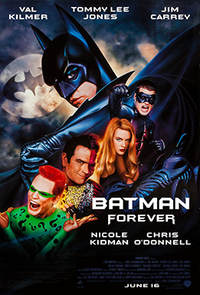 Batman Forever is a 1995 American superhero film directed by Joel Schumacher and produced by Tim Burton, based on the DC Comics character Batman. A stand-alone sequel to the 1992 film Batman Returns and the third installment of Warner Bros.' initial Batman film series, it stars Val Kilmer replacing Michael Keaton as Bruce Wayne / Batman, alongside Tommy Lee Jones, Jim Carrey, Nicole Kidman, Chris O'Donnell, Michael Gough, and Pat Hingle. The plot focuses on Batman trying to stop Two-Face and the Riddler in their villainous scheme to extract confidential information from all the minds in Gotham City and use it to learn Batman's identity and bring the city under their control. In the process, he gains allegiance from a young, orphaned circus acrobat named Dick Grayson, who becomes his sidekick Robin, and meets and develops feelings for psychologist Dr. Chase Meridian, which brings him to the point to decide if he will lead a normal life or if he is destined to fight crime as Batman forever.

In Gotham City, the vigilante Batman defuses a hostage situation orchestrated by a criminal known as Two-Face—formerly district attorney Harvey Dent, who was disfigured with acid by mobster Sal Maroni, which Batman failed to prevent—but Two-Face escapes. Edward Nygma, an eccentric researcher at Wayne Enterprises, approaches his employer, Bruce Wayne—secretly Batman—with an invention that can beam television signals into a person's brain. Bruce rejects the device, concerned the technology could manipulate minds. After killing his supervisor and staging the death as a suicide, Nygma resigns and plots revenge against Bruce, obsessively sending him riddles; as a favor to Bruce, criminal psychologist Chase Meridian diagnoses that his stalker is psychotic.