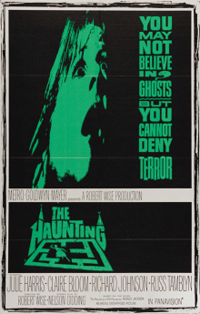 The Haunting is a 1963 British horror film directed and produced by Robert Wise and adapted by Nelson Gidding from the 1959 novel The Haunting of Hill House by Shirley Jackson. It stars Julie Harris, Claire Bloom, Richard Johnson, and Russ Tamblyn. The film depicts the experiences of a small group of people invited by a paranormal investigator to investigate a purportedly haunted house.

Dr. John Markway narrates the history of the 90-year-old Hill House, which was constructed in Massachusetts by Hugh Crain as a home for his wife. She died when her carriage crashed against a tree as she approached the house for the first time. Crain remarried, but his second wife died in the house from a fall down the stairs. Crain's daughter Abigail lived in the house for the rest of her life, never moving out of the nursery. She died calling for her nurse-companion. The companion inherited the house, but later hanged herself from a spiral staircase in the library. Hill House was eventually inherited by a Mrs. Sanderson, although it has stood empty for some time.