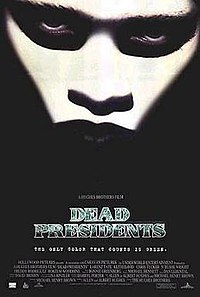 Dead Presidents is a 1995 American crime thriller film co-written, produced, and directed by Albert and Allen Hughes. It stars Larenz Tate, Keith David, Chris Tucker, Freddy Rodriguez, N'Bushe Wright, and Bokeem Woodbine. The film chronicles the life of Anthony Curtis, focusing on his teenage years as a high school graduate and his experiences during the Vietnam War. As he returns to his hometown in The Bronx, Curtis finds himself struggling to support himself and his family, eventually turning to a life of crime.

In the North East section of the Bronx, New York during the spring of 1969, Anthony Curtis (Larenz Tate) is about to graduate from high school, and decides to enlist in the U.S. Marine Corps rather than go to college. He is sent to Vietnam, leaving behind his middle-class family, his girlfriend Juanita (Rose Jackson), and small-time crook Kirby (Keith David), who is like a second father. Anthony's close friend, Skip (Chris Tucker), later joins Curtis' Recon squad after flunking out of Hunter College and his other friend Jose (Freddy Rodriguez), is drafted into the U.S. Army. Once in Vietnam, Curtis and his squad lose several fellow Marines during combat, and commit several atrocities of their own, such as executing enemy prisoners and beheading corpses for war trophies.