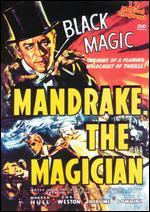 Mandrake the Magician (1939) is the seventh serial released by Columbia Pictures. It was based upon the King Features comic strip of the same name.

Mandrake and his assistant Lothar are working the cruise lines and make the acquaintance of Professor Houston who has developed a radium energy machine, which is much coveted by a masked crime lord known as "The Wasp". The Wasp unleashes his army of accomplices in waves to steal the invention by any means necessary. Mandrake and his allies finally catch up to "The Wasp" and discover the crime lord is actually scientist Dr. Andre Bennett, posing as a close friend of Houston.