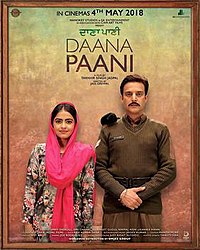 Daana Paani(Punjabi : )is a 2018 Indian-Punjabi family drama film directed by Tarnvir Singh Jagpal and stars Jimmy Sheirgill and Simi Chahal in lead roles. The film is written by Jass Grewal and is produced by Nanokey Studios and GK Entertainment in association with Tarn Jagpal films and Cam Art Films. The film plots the story of Basant Kaur, who lost her father when she was young and her mother is also separated from her. The film also features Gurpreet Ghuggi, Nirmal Rishi, Kanika Mann, Nikeet Dhillon and Tarsem Jassar in supporting roles. The film was released worldwide on 4 May 2018.

Basant Kaur wrote an autobiography novel titled as “Daana Paani”. Some reporters approached her for an interview and hence she started narrating her story.