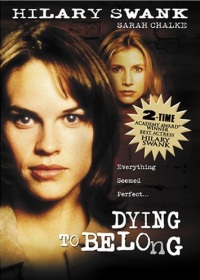 Dying to Belong is a 1997 American television film directed by William A. Graham.

Lisa Connors, an Anders University freshman, has big hopes of a job at the university newspaper. Her ambitious mother, Gwen, suggests Lisa should join a sorority, Pi Gamma Beta (ΠΓΒ), as she herself had great fun during her days in the sorority. Lisa applies to Pi Gamma Beta, the most prestigious sorority on campus.