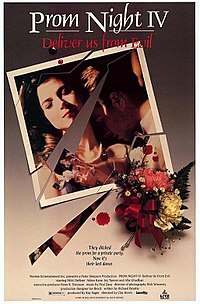 Prom Night IV: Deliver Us from Evil is a 1992 Canadian slasher film directed by Clay Borris and starring Nicole de Boer and J.H. Wyman. The film follows a deranged Catholic priest who targets four teenagers on their prom night. It is the fourth and final film in the original Prom Night film series. Like the previous film, it was released briefly in theaters before later being released to video.

At Hamilton High School's 1957 prom, students Lisa and Brad leave the festivities to have sex in Brad's car. Before the two can undress, they are distracted by a noise, revealed to be someone putting candles on the hood of the car. After spotting the candles, Lisa has her throat slashed by a metal crucifix, wielded by psychotic religious fanatic, Father Jonas; he then stabs Brad in the chest before igniting the car in flames. After committing this double homicide, Father Jonas reveals he had suffered sexual abuse from priests in the church and displays stigmata. He is transported from St. Basil Seminary to the St. George Church by a group of fellow priests led by Father Jaeger, who refers to the rambling Father Jonas as an abomination and believes him possessed by dark forces.