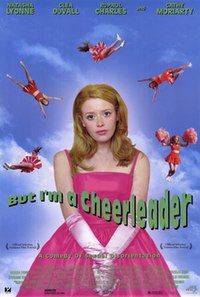 Seventeen-year-old Megan Bloomfield (Natasha Lyonne) is a sunny high school senior who loves cheerleading and is dating a football player, Jared (Brandt Wille). She does not enjoy kissing Jared, however, and prefers looking at her fellow cheerleaders. Combined with Megan's interest in vegetarianism and Melissa Etheridge, her family and friends suspect that she is in fact a lesbian. With the help of ex-gay Mike (RuPaul), they surprise her with an intervention. Following this confrontation, Megan is sent to True Directions, a reparative therapy camp which uses a five-step program (similar to Alcoholics Anonymous' twelve-step program) to convert its campers to heterosexuality.