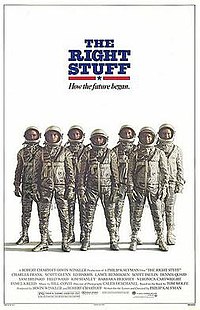 The Right Stuff is a 1983 American epic historical drama film written and directed by Philip Kaufman. It was adapted from Tom Wolfe's best-selling 1979 book of the same name about the Navy, Marine, and Air Force test pilots who were involved in aeronautical research at Edwards Air Force Base, California, as well as the Mercury Seven, the seven military pilots who were selected to be the astronauts for Project Mercury, the first human spaceflight by the United States. The film was written and directed by Philip Kaufman and stars Sam Shepard, Ed Harris, Scott Glenn, Fred Ward, Dennis Quaid and Barbara Hershey. Levon Helm narrates, and plays Air Force test pilot Jack Ridley.

The film begins in 1947 at the Muroc Army Air Field in California, with civilian and military test pilots flight-testing high-speed aircraft, including the rocket-powered Bell X-1. Death is a part of their life. After privateer Slick Goodlin demands $150,000 to attempt to break the sound barrier in the X1, World War II hero Captain Chuck Yeager is given the chance. While horseback riding with his wife, Glennis, the evening before his historic flight, Yeager falls and breaks his ribs, an injury which inhibits his ability to lock the door on the X-1. Worried that he might not fly the secret mission, he confides in friend and fellow pilot Jack Ridley, who solves the problem by giving Yeager the stump of a broom handle to use as leverage. Though the X1 bucks like a wild bronco, and pushes him to his limit, Yeager goes supersonic and lives. Yet the attendant sonic boom initially causes people to think his plane has exploded. However, an officer immediately classifies his achievement, denying him the fame of his accomplishment, which some people thought couldn't be done in an airplane.