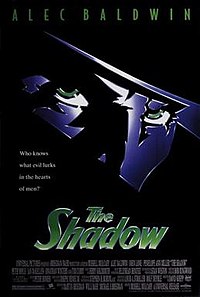 The Shadow is a 1994 American superhero dark fantasy film from Universal Pictures, produced by Martin Bregman, Willi Bear, and Michael Scott Bregman, and directed by Russell Mulcahy. It stars Alec Baldwin, supported by John Lone, Penelope Ann Miller, Ian McKellen, Jonathan Winters, Peter Boyle, and Tim Curry. The film is based on the pulp fiction character of the same name created in 1931 by Walter B. Gibson.

In Tibet, following the First World War, American Lamont Cranston, succumbing to his dark instincts, sets himself up as a warlord and opium kingpin under the alias of 'Yin-Ko' (said to mean 'Dark Eagle' in a Mandarin Chinese dialect). He is abducted by servants of the Tulku, a holy man who exhibits otherworldly powers and knows Cranston's identity. He offers Cranston a chance to redeem himself and become a force for good. Cranston refuses but is silenced by the 'Phurba', a mystical, sentient, flying, three-edged dagger. Ultimately, Cranston remains a student under the Tulku for seven years. In addition to undergoing rigorous physical training, he learns how to hypnotize others, read their minds, and bend their perceptions so that he cannot be seen, except for his shadow.